Sri Lanka offers something for everyone. There's the ancient Sinhalese ruins of the Cultural Triangle; the Hill Country's colonial plantation bungalows, misty peaks and endless tea; Kandy's revered Temple of the Tooth; national parks where leopards, elephants and bears roam free; and the warm turquoise seas where you can see whales and dolphins, and scuba to coral reefs.

This island's endless swathes of un-spoilt palm-speckled beaches are its biggest draw. The sultry south-west stretch linking the water sports capital of Bentota, the historic 17th century fortified city of Galle and the rustic shoreline of Tangalle is the most developed, accessible and popular, and also where most of the island's villas – many atmospheric heritage homes - can be found.

Sri Lanka's relatively small size means that you can take in the best of the island's attractions within a few weeks. The south-west coast and hill country are at their climatic best between December and April, which is when the majority of visitors come. The inter-monsoonal northern summer months are not to be avoided either as quick downpours intersperse long sunny days. The expansive living and dining areas of this evocative 5-bedroom family-friendly villa in the heart of Galle Fort offer plenty of potential for entertaining. Spread between two expansive buildings fringed by courtyard gardens, this fully staffed villa features a lap pool, expansive roof terrace and plenty of kids’ facilities. 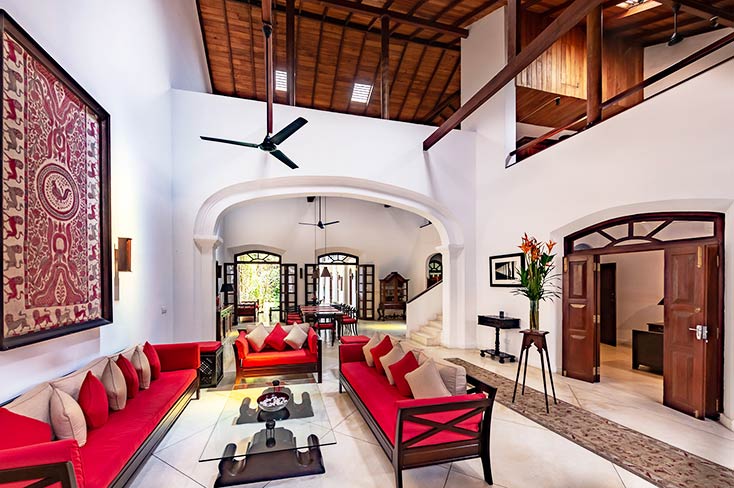 No 39 Galle Fort is a three-bedroom heritage house located right in the heart of Galle's 17th century Dutch-built fort, close to major landmarks, restaurants and shops. Grand and spacious, yet equipped with every home comfort, this atmospheric heritage home is staffed, and ideal for groups of friends and families. This grand 4-bedroom fully staffed villa sits in extensive gardens and offers true escapism beside a blissfully isolated beach visited by turtles.  Ideal for families, groups and nature lovers, the house is spacious and has a big, fenced T-shaped pool.  There are plenty of exciting national parks to visit nearby. 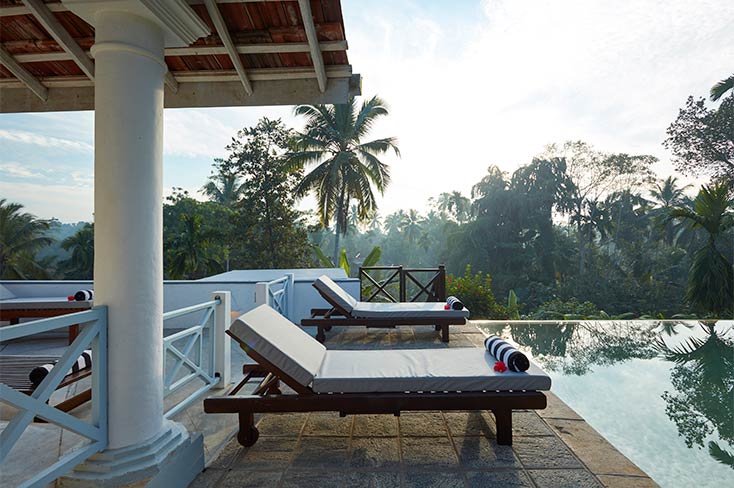 This 5-bedroomed colonial-style hilltop villa near Koggala is enveloped by an expansive tropical garden and is a paradise for exotic wildlife and birds. The villa, which has a blissful 10m swimming pool, is fully staffed and incredibly private, and beaches are only a ten-minute drive away.

One of the oldest homes in historic Galle Fort, 32 Middle Street is a highly secluded house where careful renovations have exposed original timber ceilings and provided for three spacious bedrooms, a contemporary open plan living/dining area filled with art and antiques and a pretty courtyard garden with swimming pool.

This 2-bedroom (plus kids’ bunk room), self-catering, historic colonial house in Galle Fort, staffed by a daytime maid, is just 30 metres from a swimming beach and the fort’s slender white British-built lighthouse.  An upper-floor master bedroom attached to an ocean-view roof terrace makes the house particularly attractive for couples.

An evocative 160-year-old bungalow overlooking Nuwara Eliya town surrounded by a well-maintained garden of clipped lawns, preened hedges and scented roses. With 4 comfortable  bedrooms, open fireplaces, cosy lounges, an elegant dining room and plenty of colonial character, this is a gorgeous holiday home in the hills.

Set on the banks of the shimmering Bentota River, Apsara is a beautifully finished 3-bedroom villa just five-minutes from the beach. An excellent staff team plus top chef attend to all your needs so you can relax by the pool, savour the aquatic views and enjoy the villa’s luxurious facilities.

Relaxed, family friendly, tropical home with an expansive garden, ocean views and a lovely pool and jacuzzi on a sunny lawn.  Managed by a husband-and-wife team, Blue Heights offers 4-bedrooms and unfussy interiors that open widely to the views; the location is tranquil and the beach is five minutes’ walk away.

Perched on a hillside overlooking Nuwara Eliya, Brockenhurst is a century-old classified heritage home set in a one-acre garden with two-tiered lawn. Featuring 4 comfortable bedrooms and a cosy lounge with open fireplace, this serviced property is a nostalgic base from which families and groups can explore the hill country.

One-of-a-kind Geoffrey Bawa-designed 5-bedroom hillside house, dating back to 1984 and set in eight landscaped acres near Dickwella with fantastic panoramas over Kudawella Bay. Each bedroom has a sea view and there are two swimming pools, a dedicated staff team and direct access to a lengthy palm-fringed beach.

This beautifully renovated cottage set amidst leafy tropical gardens in a tranquil village near Ahangama, is just five minutes’ walk from the beach. With 4 bedrooms, plus living and dining areas, the property is spacious, airy and light and enhanced by a deep blue swimming pool beside an elevated ambalama.

Escape to a cooler climate and relish the tranquillity of days gone by at 5-bedroom Craig Appin Bungalow near Hatton in the southwest Hill Country. Encircled by a pretty garden, the bungalow is fully staffed and features a living room, a TV Lounge, a dining room and a furnished veranda.

This atmospheric ex-planters abode perched on the summit of a tea-clad hill above Dick Oya features 4 spacious bedrooms, including a family suite, a handful of living rooms and a gorgeous four-acre garden bursting with flowers and vegetables. It’s fully staffed, and makes a perfect base for savouring the great outdoors.

Ideal for family holidays, Galle Henna Estate is a beautifully renovated 5-bedroomed manor house set within spacious grounds overlooking acres of vivid green paddy fields, five minutes from the beach. There’s a swimming pool in the wildlife-filled garden and the elegant interior design of the house makes it feel like home.

Heavenly Hideaway is an enchanting manor house encircled by lush coconut and pineapple plantations that characterise the beautifully serene landscape of rural Gampaha. There are 3 gorgeous bedrooms, private jacuzzis, a cool bar, a TV with huge DVD selection, a generous swimming pool and a wonderfully pampering seven-strong staff team.

Sited on the most desirable section of beach in Talpe, IF is a gorgeous Dutch-colonial-style villa with verdant garden, spacious sundeck, panoramic ocean views, private swimming pool and spacious dining pavilion. The property comes staffed with a cook and is perfectly set up for families and groups of friends.

Oceanfront Indisch is superbly located on a picturesque curve of sandy coastline south east of Galle and features a large swimming pool and an expansive lawned garden with kid’s playground. Ideal for families and groups, this hugely spacious villa comes with an exceptional staff team, and is very private and secure.

An elegant country villa overlooking a lowland valley of paddy fields, with 4 bedrooms, generous living spaces, a modern open-plan kitchen and a helpful team of staff.  Enveloped by a lush palm-spiked tropical garden, Ivory House also has a gorgeous lap pool that takes full advantage of the rural vistas.

Kadju House is a contemporary 4-bedroom villa enhanced by tropical scenery, abundant wildlife and a fabulous location minutes away from beautiful, deserted beaches. With a minimalist design that frames the spectacular sea views, this fully-serviced beach pad with pool and spa offers blissful serenity for couples, groups and nature lovers.

This idyllic 2-bedroom beach pad on Sri Lanka’s tourist-scarce north-west coast is perfect for couples, families and even groups as daybeds increase capacity to ten. Khomba House is staffed and comes with a huge beachside garden and access to two swimming pools, a water sports centre, restaurants and a spa.

This fabulous 1-bedroom beach house bursts with colour, energy and soul. It’s perfect for couples who will love its privacy, intimacy and blissful comfort. Enhanced by the services of a housekeeper who’s also an excellent cook, Kikili Beach has a great location within sight of Unawatuna and close to Galle.

Comprising just two bedrooms, a living–dining area and kitchen (complete with great cook); this idyllic beach pad near Tangalle is without pretensions. Revelling in its sensational seaside situation, contemporary Kurumba’s emerald lawn is scattered with comfortable recliners, a hammock and a deeply cushioned ambalama just footsteps from the beach.

An exceptionally spacious 7-bedroom hillside villa, a short drive from Galle’s beaches.  Rooms are spread across three buildings amidst meticulously landscaped tropical gardens, and standout features include a gorgeous 18-metre infinity pool with valley views, a gym, an entertainment room and full complement of staff including an excellent chef.

Charming 4-bedroom colonial villa with pool near Koggala Lake and not far from the beach; highlighted by a spacious tropical garden abundant in plants, trees and wildlife. A nature lover’s paradise and a great family home, Malgedara is serenity in an authentic village setting, ideally located to explore the Galle region.

Sited on the verdant banks of the picturesque Koggala Lake, just five minutes from the beach, Mandalay is a gorgeous 3-bedroomed staffed property that’s fabulous for families but equally terrific for two. Its large swimming pool is a treat and its glorious lakeside situation is tranquil and sure to inspire.

Wide access onto an almost deserted sandy beach near Ambalangoda coupled with a large palm-shaded garden are highlights of 5-bedroom Max Wadiya. Relaxing, spacious, comfortable and full of colonial antiques, this villa is ideal for extended families, two individual families or groups of friends. Rates include all meals.

This contemporary-styled but century-old manor house inland from Tangalle is the perfect tonic for anyone needing R&R. With 5 bedrooms, a 20m pool, an excellent chef and a two-acre garden that spills onto the facing rice fields, fully staffed Maya is a serene and beautiful place to relax and unwind.

This vibrant 4-bedroom beach house is just around the corner from Dalawella’s tranquil beach and restaurants, near historic Galle. Expansive living areas spill onto a convivial pool terrace and tropical garden, a staff of four includes a chef, and 10% of Mihiri House rental rates go to a local charity.

To make a general enquiry, please complete the form below: